Unfortunately, since the end of December, the situation suddenly worsened and my WHOLE head and neck became affected instead of just the right half. Ever since then, if I have anything touching any part of my head or neck, even my pillow, the circulation to my head gets more and more cut off and my head becomes more and more numb until my vision starts to go and I have to jerk my head up quickly off the pillow and prop myself up so that my head and neck aren’t touching anything so that I don’t pass out.

Due to all of this, out of the 24 hours in a day, I now can only lie down flat with my head on my pillow for 2 hours. It’s a big change for my body to be semi-sitting up most of the time; my heart is failing and constantly deteriorating from not being fully horizontal. It just can’t take it; there was a reason that I had to be lying flat for 13 years.

Constantly having to hold my own head and neck up (apart from the two hours a night when I put my head down) also means that I’ve had zero sleep since the end of December and the sleep deprivation is horrific and only getting worse. I don’t know how I’m still going and able to semi-coherently write this but here I am.

Even though my heart is too unstable and my body too fragile to be moved, even by ambulance, I had to decide if I was going to risk death by going to a hospital in Birmingham to have a specialist MRI to find out what’s going on in my head, brain and spine. In the end, I had to risk it because I couldn’t carry on like this.

Those of you who know my family will be aware that we also had to move house because we couldn’t afford to rent there anymore. So we timed the MRI and the house move for the same day (8th February) because I knew that I would struggle to survive one trip, let alone two. On the 8th, I was taken by ambulance to Birmingham, had the MRI, then was taken by ambulance to our new house on the return trip. I’m still alive but not without convulsions/seizures and serious heart events along the way.

Everything since then has been a disaster. Not only is there the damage, deterioration (especially re heart failure) and agony from the severe physical exertion of the ambulance journey and MRI, but our new house has been a catastrophe for me. Those of you who know about my illnesses, know that noise is agony for me and that noise is the equivalent of a physical activity, which makes my symptoms more severe. My parents tried to make my room soundproof but upon arrival, we very quickly discovered that it hadn’t worked at all. So it has been torture with the roadworks, busy road, frequent (military?) jets overhead, loud drips from an overhang, as well as being able to hear every movement and footstep of my parents inside the house. It’s unbearable and I don’t know how I’m going to carry on like this.

First we have to focus on the medical stuff though because I NEED to be able to lie down without blood being cut off to my head and passing out.

We got the results of the MRI yesterday. They showed that I have:
• reversal of the cervical lordotic curve (which is probably what is cutting the blood off – I really need a doctor to do a Doppler Ultrasound on a home visit to check but I don’t know if that’s possible)
• instability at cranial cervical junction demonstrated on flexion and extension positions
• translational movement of basion with respect to odontoid process in flexion-extension noticed on T2 W sagital sequence
• degenerative changes in cervical intervertebral discs at multiple levels

It turns out that in patients with Ehlers-Danlos Syndrome (even in the vascular type, which is what I have), a minor head injury can cause all sorts of consequences, like the ones above, which may have accelerated what the EDS was already doing to my body.

The problem now is that there’s only one doctor in the whole of the UK who specialises in craniocervical instability (CCI) in EDS patients (it’s critical that the doctor treating it has an in-depth knowledge of EDS because EDS affects the type of interventions/treatments that can be done safely). Given that he’s the only doctor in the UK, he’s very busy and has a long waiting list so we’re currently waiting to hear back whether he can take me on or not. In the meantime, I have to carry on in this state, working hard to hold my head and neck up 22 hours of the day. My whole body is falling apart with the strain of it. It’s not bearable. But I’m still here. My parents are looking into finding a quieter place to live but I don’t know if that’s going to be possible. And my body can’t take being moved again.

To end on a slightly lighter note, the only good thing that has happened is that my parents have unearthed my books from childhood and teenagehood. I’m not able to read them but it has made me very happy to see some of them. I doubt that any of you will be interested in them but I’m going to post the pictures here anyway because it brings me joy to see them.

First up are the comics. I have at least 3 stacks of individual comics as big as this:

(I also have many, many Beano annuals but I wasn’t able to get a photo of them)

I loved Roger the Dodger, Minnie the Minx, Ivy the Terrible, The Bash Street Kids and the Numbskulls. Here are some photos of those comic strips from 1992 to get your nostalgia flowing (you can click on them to get a better view):

I also loved the comic ‘Buster’. Here are some from 1993-1997 (I remember the free trick pencil and the free joke nail very well!):

My favourite strip in Buster was probably Cliff Hanger:

I have a few copies of BVC (the Big Value Comic) too. I remember Fuss Pot, Milly O’Naire and Penny Less, Ivor Lott and Tony Broke, Odd-Ball and Book Worm: 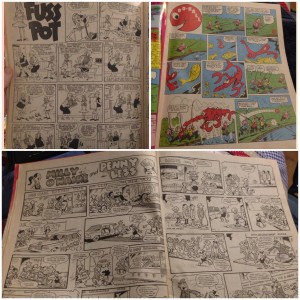 I don’t have all that many copies of the Dandy. I wasn’t as keen on it. This is the one that I remember most:

Beryl the Peril was my favourite strip in the Dandy:

Next up is The Hippo Book of Hilarious Poetry:

It’s from 1989 so it was probably my first poetry book. I remember loving it but looking back now, some of the poems were a bit…weird. Like these (as always, click for a closer view):

But my favourite one was about the English language:

Next up was my favourite of all favourites: the Malory Towers series by Enid Blyton.

Just seeing the covers of my copies makes me smile. They’re a bit worse for wear because I reread them so many times (and I think Dad accidentally dropped one in the bath a long time ago!) but I love them:

In the first book, the new girls, including Darrell Rivers, are taken to see the Headmistress, Miss Grayling. Her words to them had a big impact on me regarding the way I wanted to live my life and the person I wanted to be. Here are Miss Grayling’s words:

Then in the final book, mirroring the experience in the first book, Darrell, now Head Girl, takes the new girls in to see Miss Grayling. What Miss Grayling says to Darrell afterwards is what I always dreamed someone would say to me at the end of my school career. I hope I became that sort of a person anyway. Here it is:

The next book is the Prime Minister’s Brain. I’m really glad that my parents found my copy of it as I remember it so well and so fondly. They don’t make them like this anymore! 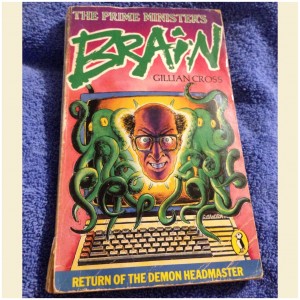 I vividly remember the illustrations and was happy to see that I’d recalled them correctly and there they all were. They stir so many memories:

Seeing my old copy of The Dark is Rising sequence was wonderful:

We also found my GCSE copy of An Inspector Calls, complete with my notes in the margins. I remember trying to make my handwriting tiny in order to fit more in. I last saw it in 2002 for my GCSE exams. Here it is:

We also found my copy of Daddy-Long-Legs by Jean Webster but then discovered that it had my aunt’s name written inside it so the book must have belonged to her a very long time ago:

There are lots more but I think that’s enough for now. I’ve enjoyed it, even if nobody else has.