A trip to the cinema was always a special treat. It has been fun trying to remember all the films that I saw at the cinema before I became ill. The following are my memories of my formative cinema experiences.

The first film I ever saw at the cinema was Tom and Jerry: The Movie (1992), which I only very vaguely remember. I’m not sure if Mum was there but Dad and my brothers definitely were. I was very excited to be at the cinema but I got a bit restless during the film; it seemed to last forever.

My Nanny and Granddad took us to a rerelease of Disney’s Snow White and the Seven Dwarfs in 1993 but I don’t recall much more about the experience than that.

My older brother always says that I then saw The Lion King (1994) but I have no recollection of this. He says that he remembers it because he was jealous that I got to see it at the cinema and he didn’t! So I’m guessing that I saw it with friends. I watched The Lion King so many times on video (VHS) afterwards that I’ve forgotten the first time that I saw it.

I also recall watching Andre (1994) with a school friend. It was a sweet little film about a girl and a seal.

Next was Power Rangers: The Movie (1995). I remember standing outside the Odeon cinema in Colchester (at its old site) with my younger brother and one of his school friends. I was overexcited; I loved Power Rangers so much (mainly because of Tommy, the green/white Power Ranger). At the time, the film seemed brilliant and very emotional (!). I obviously have exceptional taste in films. I got the Ivan Ooze purple slime for Christmas that year, which my relatives thought was gross and disgusting so I gleefully played with it in front of them. It was a bit like silly putty but looser and more gloopy.

The next film I remember seeing at the cinema was Toy Story (1995), with my family and our friends the Adams family, also at the Odeon in Colchester. I’m trying to recall my feelings about the film; I think that I enjoyed it and felt it was okay/good but not great. Not the quality of the Power Rangers film. *snorts*

Then was Men in Black (1997) with my best friend from back then. We were at the cinema by ourselves, which was very exciting and I enjoyed the film a lot. Though I remember thinking it very shocking that there was a swear word (in the first line, no less). I remember worrying ‘oh no, what if my parents found out that I saw a film with swear words in?’, which is funny to think of now. I seem to recall that afterwards, we had a McDonald’s and put on the Men in Black shades that came with the Happy Meal for the whole time. We thought we looked cool.

My brothers and I saw Flubber (1997) when we were living in Cannock. Everyone else was queuing for Titanic but we, of discerning film taste, chose Flubber. I didn’t watch Titanic for the first time until relatively recently on Netflix. It seemed like all the girls at school went to see Titanic multiple times back in 1997 but I wasn’t interested in it. 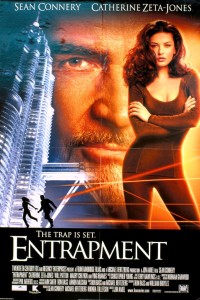 I then saw Entrapment (1999) at the Odeon in Colchester (I must have gone back there to visit my friend), which seems like a bit of a random film to have gone to the cinema for. Nobody else turned up to that particular screening so we had the whole cinema room to ourselves, which was an incredible experience. We could do whatever we wanted! (Which actually didn’t turn out to be anything different than usual, apart from maybe putting our feet up on the back of the chairs in front of us).

The next film I saw completely blew me away. It was one of those ‘aha!’ moments when I realised how amazing films could be and what the fuss was all about. Don’t laugh but the film was Star Wars Episode 1: The Phantom Menace (1999). I saw it with my parents and brothers but then my brothers and I went on to see it THREE times at the cinema in total. It was just the most incredible thing we had ever seen. Everyone makes jokes now about The Phantom Menace and how bad it is but at the time, I didn’t know anyone who didn’t love it. Only adults found Jar Jar Binks annoying; we just found him amusing. IT’S A GOOD FILM. *maniacal stare*

On the ferry back from a school trip to France, I saw a screening of Miss Congeniality (2000) with my school friends. The friend sitting next to me was surprised that I liked it because it wasn’t a genre (romcom) that I had ever really watched before and, due to being a tomboy, apparently I wasn’t expected to like those type of films! But I loved it. I still love it now. The ferry crossing was really stormy though so the chairs kept on sliding across the floor as the boat rocked from side to side quite vigorously.

I very nearly didn’t go to see Harry Potter and the Philosopher’s Stone (2001). I had told my family that I was NOT going to watch it because I didn’t want the imagined pictures in my head of all the characters and places from reading the books to be replaced by the faces of the actors and the film sets. Five minutes before my parents and brothers were going to leave for the cinema, I changed my mind and joined them after all. As soon as that magical Harry Potter theme music started up as the film began, I was glad that I did go and got to experience it with my family, even if so many things in the film were ALL WRONG. I was also miffed that it wasn’t me playing Hermione bahaha.

Next up was The Lord of the Rings: The Fellowship of the Ring (2001) with my parents and brothers at a cinema in Lowestoft. My brothers were the ones who loved The Lord of the Rings; I was a bit more indifferent to the books and it had been a very long time since I’d read them, so I wasn’t expecting much from the film. Which is why it was the best surprise when my socks were knocked off in the most spectacular fashion. I was in a speechless sort of hallowed shock afterwards. I had never seen anything like it before. I was awestruck and loved it so much. The Lord of the Rings trilogy became my favourite films for a very long time. It’s still in my top 5 films to this day. It has a special place in my heart. It’s the one exception to the rule of ‘the books are always better than their film adaptions’.

I think that I saw Shrek (2001) at the Ipswich Odeon cinema but I can’t remember with whom.

It’s hard to imagine, given the dominance of the genre now, but it was new and unusual to see a superhero film at the cinema. Superman will always be my favourite superhero (I saw the Christopher Reeve films on video when I was young and loved the TV series Lois and Clark: The New Adventures of Superman) but the film Spider-Man (2002) was pretty good too. I got goosebumps at the cinema when I heard the line ‘With great power comes great responsibility’.

Minority Report (2002) was stunningly brilliant for me at the time. I found it very exciting and loved it. I remember seeing it with my parents and brothers at a cinema which had enormous individual comfy chairs to sit on, almost like armchairs (though I can’t for the life of me remember where this cinema was). Mum didn’t like the bit with the eyes though.

I can’t remember if I saw the original X-Men film at the cinema but I definitely remember seeing X2 (2003) with my Mum and brothers. I still have the ticket stub somewhere. Before the film, I leant my elbows on the back of the seats in front of me to try to stop anyone sitting there and blocking my view. It didn’t work. People came and sat there anyway and I had to sit back in my chair again.

I saw Pirates of the Caribbean: Curse of the Black Pearl (2003) with a different friend in Colchester (my first time at the new Odeon site). It was thrilling and funny; we were buzzing afterwards.

With friends from sixth form at Woodbridge, I either saw The Matrix Reloaded (2003) or The Matrix Revolutions (2003) at what used to be the UGC cinema (now Cineworld) in Ipswich; I can’t remember which film it was. They sort of blur into one. It was enjoyable to watch, even if it was panned by critics.

I then saw Love Actually (2003) with another friend for her birthday. It wasn’t long after I’d passed my driving test and I drove us both to the UGC in Ipswich all by myself, without an adult there to tell me directions. I was nervous about remembering the way there and which lanes to get into but I managed it (these were the days before SatNav!). I felt very grown up. We both enjoyed Love Actually and were chuckling away, especially at the Hugh Grant dancing in Downing Street part.

To celebrate the end of A-Level exams and as a thank you to one of my teachers, who was also a family friend, my family and I went to see Troy (2004) with my teacher. I remember rabbling on about my exam as we walked from where we parked to the cinema and obsessing about a word that I wasn’t sure if I had translated correctly!

Those are the cinema moments that I can think of off the top of my head. What were your most memorable/formative cinema experiences? Can you remember the first film you ever saw at the cinema? Let me know in the comments.